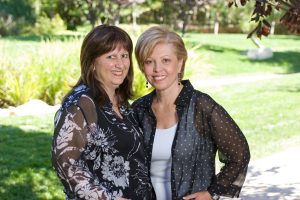 Nancy and Harriet in 2007. Photo by Ginny Rickey.

Harriet Wasserman is a 40-year veteran in the entertainment industry and a ten-year member of the Board of Directors of Cancer Support Community Valley/Ventura/Santa Barbara. Despite being a sought-after music agent, her proudest achievement is her family. She and her husband Ted have been married for 60 years and have two children and six grandchildren.

It was her daughter Nancy’s 2005 breast cancer diagnosis that brought Harriet to CSCVVSB. After learning about the support services available there, Harriet encouraged Nancy to try it out, even offering to go with her if it would help. Harriet joined a Caregiver Support Group, and Nancy joined a Patient Support Group.

“That group ended up being the one thing she looked forward to the most,” says Harriet. “She never missed a Wednesday.” In the final week of Nancy’s battle against cancer, when she could no longer travel, her entire group came to her home for their Wednesday meeting.

“It was amazing,” remembers Harriet. “That’s what happens in the support groups. You make alliances with these people because you’re all in the same boat.”

Nancy passed away five days after her 50th birthday, but not without planting the seeds for a tradition that would end up leaving an important legacy for others affected by cancer.

To commemorate the first Breast Cancer Awareness Month after her diagnosis, Nancy wanted to give back. She and Harriet decided to organize a charity luncheon to raise funds for CSCVVSB (then called The Wellness Community).

“Our first luncheon was at my house and we had about 25 people,” says Harriet. “The next year we had 45 people. Now we get close to 100 people every year.”

The event is held outdoors at the home of Harriet’s dear friend, catered by Harriet’s son Larry and his partner Bruce, and features a raffle of exclusively donated high-end items. Keeping the expenses low has allowed the event, now called Nancy’s Angels Luncheon, to raise over $100,000 for CSCVVSB since the inaugural luncheon.

In addition to funding the support groups that meant so much to Nancy and Harriet, the luncheon is a chance for the people who loved Nancy to gather each year and keep her generous legacy going.

“We call it Nancy’s Angels because all the people who participate are angels,” says Harriet. “Old friends of hers still come every year, along with neighbors who knew her and people she worked with. For me, it keeps Nancy’s name alive.”