Faces of Hope: Friendship After Loss 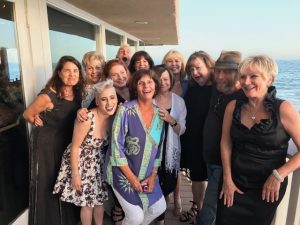 “When we first started getting together all we did was cry. Now when we get together we can laugh.” That’s Eva Gordon talking about her fellow bereavement group members at the Cancer Support Community Valley/Ventura/Santa Barbara (CSCVVSB). The group, facilitated by Anne Gessert, MS, LMFT for the past 23 years, is offered free of charge to people in our community who have lost a loved one to cancer.

Eva and her friends Eileen Beck, Marilyn Lippel and Maria Potje were kind enough to share the story of the lasting bonds they found in the group.

Here is their story in their own words:

I lost my husband three and a half years ago from bone and lung cancer. We had met at temple. We had a wonderful six years together. I ran into someone at temple who had just lost his wife, and he told me about the group. I met many great people in the group. I attended for about a year and a half and have kept in contact with Anne and the others.

Since leaving the group, we have tried to get together monthly. I had a brunch at my house for about 18 people and we had 30 people at a pool party at Eileen’s house. Everyone had a great time and a few shared their stories with others. We all said that we would not have been there if it had not been for Anne. She has done so much for us and we love her for it.

My husband of 37 years was diagnosed with Stage IV pancreatic cancer just two months after our daughter had twins with major complications, who both ended up in the NICU. My world was totally upside down. One of my friends told me there was a place in Westlake Village where I could find a support group. I joined the Caregiver Group facilitated by Peggy Johnston, MA, LMFT. I couldn’t even talk; all I could do was listen at first.

The last six months of my husband’s illness were very tough. That’s when he started to go downhill. After he passed I was a total mess. I was only 19 when I got married so my husband made me the woman that I am today.

I was so attached to my Caregiver Group members that I stayed in the group after my husband passed. It took me nine months to make the transition into the Bereavement Group.

Peggy and Anne saved my life. I still miss my husband every day. The pain will never go away but it gets softer.

The people who were in the Bereavement Group when I first joined still get together once a month or so. In July we had a pool party and barbecue at my house. It was such a beautiful day. People started arriving at 3pm and the last ones left at 8:30pm. Whether we lost a wife, husband, or child, we all know the pain, and we have all been through it. The friendships I’ve made in this group have been amazing.

When my husband was diagnosed with colorectal cancer, we both joined CSCVVSB groups – I went to the Caregiver Group and he went to a group for people with cancer. It was so helpful to be able to see other people who were going through what I was going through. We knew we could talk about the roller coaster of cancer treatment.

When my husband passed away, I kept going to the Caregiver Group because I had such a connection to the people. But eventually I didn’t want to hear about the roller coaster anymore, because I wasn’t on it. That’s when I knew it was time to join the Bereavement Group.

I went to the Bereavement Group with the hope that it would make the journey easier for me, and it did. Just knowing there was a place I could go where no one judged me when I was dealing with the things that come up. When should I take my wedding ring off? Should I date or not date? How often should I go to the cemetery? How do I help my children go through losing their father? It was so easy to be able to talk and hear other people’s scenarios and how they handled everything.

We realized how connected we were and we didn’t want to lose that connection after we stopped going to the group. Our get togethers are such a great opportunity to see each other again and see where we are in our lives and where we have come.

Last year we one of our group members got married and invited all of us to her wedding. It was so lovely to be there and see how happy she was and how happy we all were for her.

I would tell anyone going through a loss just to put one foot in front of the other and keep going. There will be days where you have setbacks, but just know that tomorrow may not be a day like that. It gets easier.

I lost my husband of 20 years to cancer. I moved from the Caregiver Group into the Bereavement Group about one month after Billy passed. We would be fairly loud after our group meetings, chit chatting all the way through the building and into the parking lot. A few people suggested we keep our conversations going so we decided to get together for brunch. We did this a few times and it became a monthly thing.

Several months ago someone came up with the idea of having a game night. Our favorite game is Family Feud. Marilyn also hosted a potluck brunch at her house, and then Eileen volunteered to have a pool party at her house. We decided to invite the current members of the Bereavement Group, and we ended up with 30 people!

Being with this group of people is a totally different environment where you can have the conversations you need to have. You don’t have to be silent about cancer or death or things that people normally don’t want to talk about. You can get to know someone in a way you ordinarily wouldn’t.

The Bereavement Group is one of dozens of groups offered free of charge at Cancer Support Community Valley/Ventura/Santa Barbara. Learn about all of our programs here, and learn how you can help here.